As originally conceived, “humanism” wasn’t about what separated us from other animals or the natural world but about finding truth within the limits of possible experience. The term as applied to cultural history didn’t emerge until the early nineteenth-century, when thinkers had jettisoned religious constructions for secular explanations of what could be known. If we look to the emergence of humanism in the chronicles of art history starting with Vasari, it is Giotto who introduces the information of the eye and human drama into representations of the sacred. While ancient texts were known through the medieval period, they began to speak to people once again when God was no longer transcendent or divine but immanent in the material world. 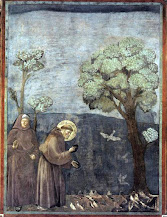 The first glimmer of the birth of humanism is Giotto’s cycle of frescoes of the life of Saint Francis in Assisi painted a century after his death. Among the paintings is “Saint Francis Preaching to the Birds” (c. 1299), which depicts one of the stories told by Thomas of Celano about Francis’ belief that God’s house is all of creation. What I’m proposing is that the humanist turn may not be singular or implicitly a matter of man’s dominion over nature. The question to ask is: who is writing our narratives?

The one in which “man is the measure of all things” certainly gained favor with the first art academies in which craftsmen gained status as learned men and drawing of the human figure became the standard of mastery. Yet focusing of the things of this world and the affairs of men came with a championing of the senses. John Locke put forth the idea that we are the product of experience in which the senses are the vehicle for that act of self-creation. Art-making becomes increasingly grounded in sensory experience wherein naturalism chips away at received knowledge, and emotion in response to nature starts to challenge Academic fare. The rise of abstraction or form over content takes place when the perceiving subject portrays what is apprehended rather than only what is observed. In Abstraction and Empathy published in 1907, Wilhelm Worringer wrote, “The value of a line, of a form consists for us in the value of the life that it holds for us. It holds its beauty only through our own vital feeling, which, in some mysterious manner, we project into it.”

It is but a blink of an eye before Jackson Pollock will assert “I am nature.” Of course for Clement Greenberg, Pollock was Jackson the Giant Killer, the ultimate exponent of the flat canvas or painting as pure painting. With this narrative locked in place, the act of painting as surrender became instead the triumph of the artificial over the natural — one man boldly going where no man had gone before. Sapped of meaning other than itself, form becomes a shibboleth, teed up to be the supreme manifestation of toxic masculinity and Western anthro-purity.