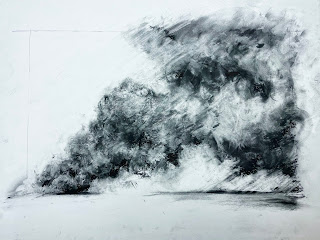 In response to Taney's request for images (Werner Sun)

We Have Been Here Before (Stephanie Grilli)

We have been here before. Our questions and concerns have been fertile ground for artists, writers, and thinkers since the eighteenth-century. I suppose one could situate the jumping-off point to be in the post-Lockean world in which the idea that we come to know the world through our senses is established, and along with that a dynamic model of selfhood arises. These coincide with the time in which Art becomes a value in itself, and maybe there is even a connection: Artworks as artworks are a sensory display whether a Chardin still life or a Kandinsky abstraction. Aesthetic coherence and creative subjecthood go hand in hand. [David’s observation of how we need the other to experience ourselves as a unity goes with artworks as well.]

Perhaps there’s an overwhelming aspect to both knowing the world through our senses and the self-as-a-work-of-art that resulted in mechanisms to channel and simplify, and these have become culturally dominant. Think of the old Devo lyric regarding “freedom from choice.” For at least three centuries, artists have been a contravening force to an increasingly one-dimensional society. Influenced by German Idealism, Samuel Taylor Coleridge called for expression that allowed for an ever-expanding consciousness and the dynamic forces out of which the world was constantly becoming. But the Victorian world that emerged that was to become our world was one in which sensationalism stood in place of unfolding revelation and the culture of visibility rested upon appearances, identity, and things.  In the middle of the nineteenth century, Thomas Carlyle despaired of “the show and sham of things,” and it seems to be ever so.

In the context of Art as a value in itself, artworks are image and object as a simultaneity. Perhaps these correspond to the dreaded mind/body dualism, but Art allows for mediating elements in which the two aspects comingle, which is form and process. Image is obviously related to imagination. Object is the subject of consciousness as well as manipulation of materials. In both, the visual artist is bringing something into existence and giving shape. As Western culture has evolved dysfunctionally, the craving for imagery and objects has resulted in a proliferation of both, with an oversaturation of images detached from context and from the physical and objects reduced to reified fetishes within a materialist system.  How strange that there now exists within the artworld itself a kind of iconoclasm that wants to suppress imagination and mastery (excuse the expression) of materials.

We haven’t really touched on the social, economic, and political forces that would make it so, but I have hinted here as to the psychology need that would make an aestheticizing sensibility untenable in ordinary lives. There is an animal need to make quick assessments and seek simple readings of information. That is why it is all the more essential that we go forward by looking backward. To that end, I suggest that we consider the aesthetic act — whether art-making, art criticism, or art history — one of interpenetration rather than interpretation. Here is where I’d like Mr. Wordsworth to body forth:

I wandered lonely as a cloudThat floats on high o'er vales and hills,When all at once I saw a crowd,A host of golden daffodils;Beside the lake, beneath the trees,Fluttering and dancing in the breeze.Continuous as the stars that shineand twinkle on the Milky Way,They stretched in never-ending linealong the margin of a bay:Ten thousand saw I at a glance,tossing their heads in sprightly dance.The waves beside them danced; but theyOut-did the sparkling waves in glee:A poet could not be but gay,in such a jocund company:I gazed—and gazed—but little thoughtwhat wealth the show to me had brought:For oft, when on my couch I lieIn vacant or in pensive mood,They flash upon that inward eyeWhich is the bliss of solitude;And then my heart with pleasure fills,And dances with the daffodils.