As a university professor, I taught a seminar “The Self as a Work of Art.” Modernist art is usually viewed in light of the search for self-expression, and the premise of the course turned that on its head. The self itself is a modernist concept that came to be around the late 17th century and the models of selfhood that subsequently developed partake of the visual aesthetic at that given time. So it started with John Locke and his tabula rasa alongside William Hogarth’s series “The Rake’s Progress.” The notion of self relies on the creative principle: we shape ourselves in a continual becoming, and the ideas and influences on that process of shaping have changed. Our selves are not fixed perceiving entities like a fixed star in a swirling cosmos, and they are not distinct from our acting upon any other phenomena. “Subject” is another “object.”

My interest in teaching this course was trying to encourage students to become more creative in becoming themselves. Sometimes I ended the course by showing Woody Allen’s film Zelig about a character who was the “human chameleon.” It seemed to me that the vast possibility of selfhood had become an operation of “fashioning after.” The last time I taught the course was before the selfie in which tropes reign supreme. This is not to say that critics did not despair of “hollow men,” “one-dimensional man” or “waxworks” in times gone by. It’s more a matter of the social and cultural factors that diminish the creative principle of selfhood seem to be winning, but perhaps it also aligns with the diminution of the model of self in art-making.

That assertion may seem ridiculous on its face in that the art world seems to be all about identity issues. But I would argue that identity is about something quite different from self precisely because it removes us from the aesthetic. I don’t shape myself. I find my identity, and I find it among the various pre-packaged models available today. Whereas artists in the past may have been the bulwark against an increasingly mechanistic world, many artists and critics would have us abandon the imagination in favor of narrowly defined human taxonomies. Generation creativity implies differentiation, but we have become political/economic entities gathered in a limited number of groupings. It is not the subjective that is to blame for encasing us in our humanness. I suggest that it is subjectivity that can be the vehicle (how’s that word choice?) that can extend our sense of being in the world to ever-widening awareness.

It struck me during Christine Corday’s talk that no matter how much she deferred to a system how much of her self was still present. Even though she abandoned painting as evidence of the artist’s hand, she made any number of choices, and it was those choices that prickled and delighted us. The way out of a solipsistic, narcissistic subjecthood is encountering and entertaining the integrity (in its double meaning) of others in their multiplicity (rocks, trees, birds, bacteria…).

I agree with Arthur and Deborah. There is a distinction between the art that may be getting shows and galleries and artists getting grants and residencies and the art that many artists are making. In running a conversation series for the art community in Denver, I know there is frustration among artists about what decides whether an artist is “relevant’ (there’s another symposium in that word). Years before, I curated a show of contemporary Taos artists, and it was interesting to see such strong, individual work by artists who had chosen to live in an isolated community away from NYC or LA with its own center of gravity and its constant reminder of ongoing human history (Taos Pueblo) in a cosmically resonant setting.

Two years ago, I curated a one-person show in Denver of the paintings of Margaret Pettee Olsen, who happened to begin her creative life as a dancer. Her gestures recall the vocabulary of Abstract Expressionism, but she works with refraction, dissimilar actions and strategies, as well color bars and floaters that partake of  boundlessness, and sensation. With reconfiguring planes and light-reflective media, the paintings resist any coherent reading and are insistently perceptually interactive — to use Taney’s phrase, decentering the human. 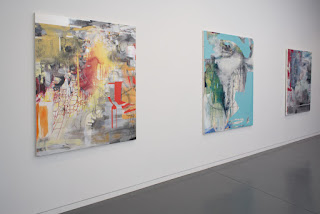 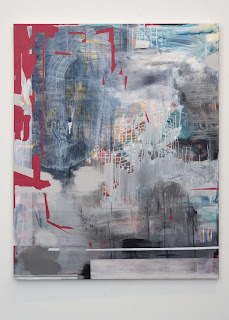 Stephanie, This post has so much I would like to respond to, way more than I can put in a comment. But I thank you for closing in on essential thinking/feeling that is so intimate to my art making life.

I resonated so redolently to this:

"I suggest that it is subjectivity that can be the vehicle (how’s that word choice?) that can extend our sense of being in the world to ever-widening awareness."

And then you move to Christine Corday, how "no matter how much she deferred to a system how much of her self was still present."

That was followed by this powerful line:

"The way out of a solipsistic, narcissistic subjecthood is encountering and entertaining the integrity (in its double meaning) of others in their multiplicity (rocks, trees, birds, bacteria…)."

Speaking personally--and I use that term intentionally with its many meanings--my art practice takes place in that spectrum between the intensely personal/subjective and the exquisitely incomprehensible cosmic/unitive. But the starting point is highly subjective and personal to me. I emphasize "starting point" since embracing the rest of that spectrum is, as you have suggested, so necessary.

Many of us--like your Taos artists--have found centers of gravity that operate from a place that has almost nothing to do with market trends and international art developments (after drugs, art is the largest unregulated market in the world after all.) And we are, in our own way, tapping into our own versions of the "cosmically resonant setting" you experienced with the Taos Pueblo. Like Salmon Rushdie's metaphor of a sea full of currents that, like stories, can be found just by reaching your hand in, the multiplicity and exquisite expansiveness of our world is everywhere. Dive in.

And how grateful I am that you included images from Margaret Pettee Olsen. Her work is full bodied, complex and compelling.