Taney asked me to address what I mean when I say that content is multivalent, complex, and expansive. Years ago, I taught an Intro to Art class in which I regaled students with taking a single artwork and re-framing it in multiple contexts and bringing forth multiple aspects and interpretations. After the first grading, a student wrote a letter to the dean of the school complaining that in my lecture I contradicted myself and that I didn’t supply the meaning to be given on the exam. In other classroom situations whenever I had Seurat’s La Grande Jatte on an exam, I could rest assured that almost every student would include that the monkey symbolized infidelity, because this was the one instance in which there was a singular reason for that figure being there. Those encountering the study of art want there to be a handy guidebook that lays out “if you see this, it means x.” The struggle becomes one of getting a student to see the picture as a painting — something made of materials involving choices that could be informed by training, tradition, temperate, and a host of other factors. So while everyday experience requires us to flatten meaning, engaging with a work of art involves an unfolding that can be never-ending (a dilation, as Roland Barthes would have it). While a work of art was born of a conceit at a specific moment in time, it contains more and expands as it becomes the sum total of all the ways it is received, which includes all the various ways in which someone may take content to mean. 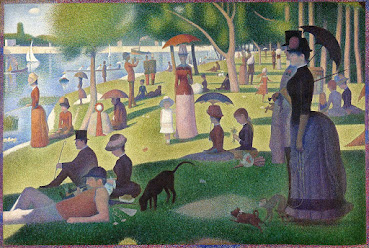 Taney also asks about the somatosensory and unconscious cognitive experience. We may want to circle back. At a time when psychology turned to matters of perception and cognition, artists in the late nineteenth century began to explore ways in which works of art could bypass intellectual operations. Someone like Gauguin explored color in terms of the direct physical impact it had on the body. Associated with his association with Analytical Cubism, Cezanne was actually concerned with trying to portray the “small sensations” experienced before familiar landscapes in the south of, creating complex compositions to comingle what he saw, felt, and knew. One might say that Seurat tried to remove the artist from the picture by devised a system based on contemporary color theory in which a painting might be executed without actually seeing the color, and the units of paint were not expected to come together outside of the perceiving viewer. [Seurat was an anarchist, and the means by which he created his paintings aligned with its philosophy of the individual working in his/her own dignity with other individuals to create society.] Interestingly, each of these artists signaled that something new was going on through comparison to other artworks in similar categories or traditions. Herein it is the form that spoke of something new rather than subject, and it would continue that way for decades to come. The early 20th-century includes many artist groups who believed that it was through form that consciousness could be change to usher in a new utopian world. 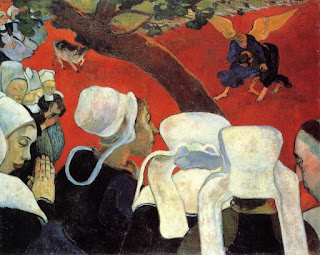 So what happened? Maybe we should look to the sequence of “isms” that collided into each other, as the twentieth century progressed ending in minimalism that left only conceptualism. This was the sixties, and there certainly was a lot of touchy-feely art then, but you could just as well liberate yourself and create the aesthetic experience in your own mind. No one believed form could bring about a revolution anymore, and rather than a vocabulary that could be used to say something new, form could be put in quotation marks. These vocabularies were also co-opted by commercial design. Form still has power, i.e. the power to sell. Maybe even worse, form and the pursuit of new form became associated with the powers-that-be rather than something that could be transcendent. We earned that Abstract Expressionism was used by the US government to show Communist countries just how we valued the individual. Maybe the whole idea of a shared humanity or a shared human experience became suspect. Or maybe it just became too much of a thankless task to teach art students how form can have meaning.

This morning I happened to read a post by Maria Popova on her website Brainpickings: “Joseph Conrad on Writing and the Role of the Artist.” I wanted to include passages from Conrad here, but it was just too difficult to chose one that is relevant to our discussion.

"So while everyday experience requires us to flatten meaning, engaging with a work of art involves an unfolding that can be never-ending (a dilation, as Roland Barthes would have it)."

Well said Stephanie, and so valuable for this symposium topic. Thanks.

Stephanie, I can't tell you how glad I am that you bring up your experience teaching art history. To me, this is a huge part of the problem. The way art history is taught leaves people with the errant assumption that art is about signification -- this signifies this, that signifies that -- and that the idea in experiencing art is to get in there and "decode" it. This has always struck me as anathema, and now of course there's the additional burden of pretentious language and the ubiquitous imperative to attach social justice narratives to everything. (As an aside, my husband took an art history course at the university where he teaches a few years ago, and he was puzzled to discover that the whole thing was about this strange concept called the "institutional critique." Imagine having that be your first exposure to art!). (Needless to say, he never took another art history course.) I think this is a question that will come up in the next session, but let me pose it here just to get us thinking: How can we restructure the way art is taught so that the subtle language of form isn't just a container for what we call "content" but *is* the very thing to which we should attend? How would we talk about historical paintings in this way -- paintings that clearly do have narratives, however secondary they may be? I wonder if you have any specific ideas?

There are a number of ways to answer your question. I’ll start by iterating what I’ve already suggested about art as a visual language, and that visual language has to be learned. I don’t think this applies only to what your calling decoding. I once had to put together a class at the very last minute and grabbed a bunch of Georgia O’Keefe paintings to show. I thought it would be a matter of the students and I groovin’ on the forms, but to my shock and amazement only about five out of a group of fifty thought they were anything more than a joke. When we are discussing the way form can register in the body, I think we need to recognize that this isn’t something that comes naturally, as it were, in our culture. If anything, beginning to understand the language of art also attunes someone to sensory experience in everyday life. I think of Rauschenberg statement to the effect that he wanted his artwork to have people look outside the artwork.

I have no problem with signification. I do have a problem with agendas or signification that is reductive, which is what an analysis that leads to “institutional critique” seems to be. When I taught at university, I could teach critical theory with one hand tied behind my back, but in the early days of post-modernism, it was a way of getting a new vantage point on art making and art history. It quickly became solidified methodology with a set of templates overlaid to arrive at an over-determined outcome. What is signified isn’t anything that may have to do with the expression of ideas as couched by the artist or the historic moment, which is the dialogue I prefer to have. The trend in making art is start with the singular concept to signify and finding the appropriate codes, rather than thinking through materials and process to arrive at an unknown. Allow for signification in its complexity and then you bump up against the ineffable.

I do think the lack of visual literacy makes it easier for exhibition venues to have themes that people can grasp. Take a socially current subject and include artists who address it. Give people the sense that they’ve been challenged but ultimately make the experience easily digestible.